Hi everyone, and apologies once again for the long delay in posting.  Things got quite hectic after our Zanzibar trip and the subsequent flu we suffered.  Then, it was two weeks back in Moshi full-on preparing for my early departure this year and making sure Kaitlin would be okay on her own.

At any rate, I am currently back in NYC attending to some Toa-related off-the-ground business – the website, for one, requires my immediate attention, and of course, chasing up fundraising opportunities will keep me busy for a bit.

Now, especially that we were unsuccessful with the Echoing Green fellowship, it is important that I devote a bit more time stateside to seek out new and diverse sources of funding.  With Carla’s new ideas and support and Kaitlin’s energy and enthusiasm, I think we have some good leads, but 2016 and 2017 have definitely had a different “feel” fundraising-wise, and Toa needs to adapt accordingly.

Anyway, this little missive will be a brief one about branding, something many people might find superficial and of little import, but that is actually pretty important in the world of name-building, fundraising, and furthering the Toa professional persona.

Earlier this year I had been bemoaning to someone or other (Carla?  Gasto??  Kaitlin???  Hyasinta????  Probably all of the above….!) that there was no place in Moshi to do bulk printing and other “office superstore” type activities.  (Here in NYC, I used to take Staples for granted; now, I realize Staples is a blessing sent from God to developed countries!).

But then I got the hook-up.

Enter Rishi Jotangia of Ramotec, a lovely Indian man who owns the closest thing to Staples Moshi has to offer, a hidden gem in the heart of town.

With Rishi’s help, I have been able to print easily: 600+ assessments, 10 assessments kits, 400+ parent questionnaires, hundreds of Angi’s graphs to pass out to the parents as proof of the efficacy of our Project, and various other bits and pieces.  All streamlined and Toa-branded.

In addition, with Rishi’s amazing ability to produce exactly what is needed on time and per cost, we have established a new incentive for the teachers, a “Teacher of the Month” plaque, which we have now bestowed upon two Toa staff members.

February’s plaque went to Mwalimu Sia whose work on the assessments was outstanding.  Sia went above and beyond to test each child at Msandaka Primary School correctly, filling the assessments out clearly and thoroughly with notes that made it obvious she was attentive to each student she tested.  Hongera sana, Sia! 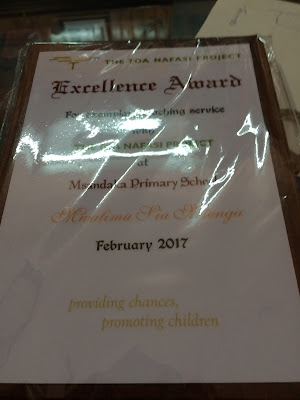 The March plaque went to Mwalimu Mshiu, our resident old-schooler.  A retired government school teacher, Mshiu joined Toa after Vumi’s death, but has since decided that she is ready to retire in earnest so has recently left Toa.  Just before she did, however, we gave her a plaque for her remarkable work with Kaitlin during the observation period.

Tanzanians are typically pretty gun-shy about asking questions.  Culturally, it is not done perhaps because it is expected that one should understand a concept after just one explanation and there is some shame in having to have that concept repeated.  Of course, this is the diametric opposite of how Westerners approach a new concept.  We generally ask questions ad nauseum until we are 100% sure of what is going on, what is expected of us, and how we are to approach the given task.  There is no shame in question-asking for us, generally.  Rather, asking questions generally signifies an interest in something new, a desire to learn, and a commitment to doing a job well.

At any rate, it was surprising to me to hear from Kaitlin that old-school Mshiu was full of questions when it came to filling out the observation forms.  These forms require our teachers to observe each new student over a two-week period and write about: gross and fine motor skills; social behaviors; cleanliness and adaptive behaviors; literacy and numeracy; vision, hearing, and speaking skills.  According to Kaitlin, Mama Mshiu was all about learning how to fill these forms out properly, asking questions left and right, and wanting to know what each field means.

So, serendipitously, Mama Mshiu earned her stars in her last month with Toa and went out with a bang.  Who will get the April plaque is anyone’s guess, but I will be excited to find out, even from afar!  Now that Team Toa is back on track, I expect these ladies to give each other a run for their money when it comes to performance.  And I will enjoy every second of that!!

Finally, a last note in Toa branding is the TZ staple of an advertising wheelcover.  Originally, Rishi had designed a much more commercial cover (tagline and website included) but since Moshi is such a small town, I thought it better to go simple with just the logo on a white background.  What do you guys think?! 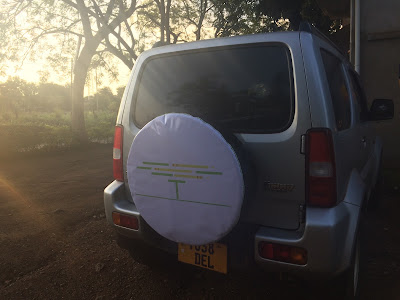