Diaspora (noun, English): a scattered population whose origin lies within a smaller geographic locale; the movement of a population from its original homeland.

Greetings, dear readers, from a gray and foggy New York City on a Sunday morning.  My apologies for not getting this exciting blog post out sooner, but I wanted to take the time to make sure I did it justice.

Our subject today is the recent DICOTA (Diaspora Council of Tanzanians in America) Health Forum, which was held in the greater Washington DC area last weekend.  I had the pleasure of attending, along with Carla (my “momager”), as well as being featured in one of the afternoon’s breakout sessions about mental health and learning disabilities, and how the diaspora can help to address issues of stigma and awareness back home.

Well.  I was utterly blown away by the people I met, the voices I heard, and the ideas I saw literally jumping into action from the expertise, excitement, and enthusiasm of my fellow conference-goers.

By the time of my panel in the late afternoon, I had to preface my remarks by saying, “I am the least qualified person in this room, at least credential-wise….”  Surrounded by doctors and nurse practitioners, ambassadors and government luminaries, and professors, humanitarians, and CEOs, I was definitely not in rural Kilimanjaro anymore.

The day opened with Ambassador Masilingi, whose remarks Carla and I missed, getting slightly lost on our safari from DC proper.  However, he was in attendance for most of the morning, and was well-received by the crowd as he posed a plucky challenge to one panelist about the relationship between awarded certification and actual competence.  Ambassador Masilingi is the current Tanzanian ambassador to the United States.  I’d not met him before, but have received letters from him and hosted a representative from the embassy, Mugendi (Andrew) Zoka, at Toa’s last friend-raiser in DC in 2016. 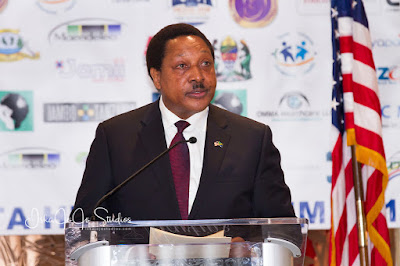 Also in the house was the woman who formerly held his post, Ambassador Mulamula, with whom I had exchanged quite a few letters and emails in the years prior to Amb. Masilingi’s induction.  She is now the head of African Studies at George Washington University, and a truly lovely human being.  She remembered The Toa Nafasi Project from our correspondence quite vividly and was thrilled to put my face to my name.  I am hoping to keep in touch with Amb. Mulamula for some time to come. 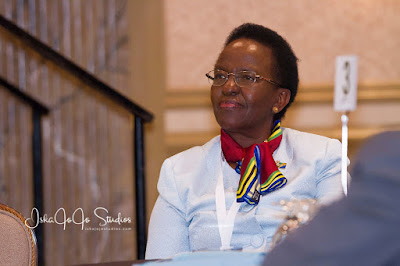 One guy who really impressed me and Carla was Dr. Frank Minja, originally from Kilimanjaro but raised and schooled in Dar.  Dr. Minja spoke at length about his work in neuroradiology at Yale New Haven Hospital and the missions he arranges with others in his field back to Dar’s Muhumbili National Hospital.  Of course, then I had to Google him, and found out that he went to Harvard Medical School, interned at Brigham and Women’s Hospital, and is pretty much the smartest person I have ever met.

Dr. Minja’s story is one that I think many of the Tanzanians whom I know and with whom I work could benefit from hearing: a regular guy born in sub-Saharan Africa (just like them) who made it to the top of a highly-prized career ladder and one that is lucrative to boot (just like the Western ideal).

Here are Dr. Minja and Mr. Lunda Asmani (the hero of this event and the man who gave me the opportunity to attend) on the dais, giving their opening remarks as co-chairs of the forum. 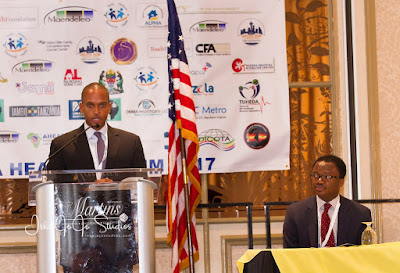 And here is Dr. Minja speaking on what he considers the “first step”: showing up.  Amen to that.  (This what we at Toa went through in February with the teaching staff, which led to my near-mental breakdown and Kaitlin’s leadership intervention: https://toanafasi.blogspot.com/2017/03/follow-leader.html)  It’s pretty basic: you’re not gonna get very far if you don’t show up to begin with.
An amazing moment from the morning’s activities came when Ambassador Chihombori-Quao of the African Union Mission to the USA spoke.  In what can only be described as a deafening call to action, this amazing lady asked the gathered crowd, “ARE YOU COLONIZED?”  Her speech was incredibly powerful and contained lots of rhetoric about colonization and neo-colonization, which really resonated with me as a mzungu living and working in Moshi these past ten years, and my mixed feelings about running a program aimed at bettering the lives of the local population.

Amb. Chihombori really ran home the point that, “Hey, Africa, wake up!  This is our continent, these are our countries, we were already divided up and pitted against each other once by others, now we’re waiting for those others to put us back together again?!”

Carla, herself the daughter of a diasporan Jamaican mother, loved this sentiment and really appreciated Amb. Chihombori’s passion and, almost, anger at the rather preposterous situation. 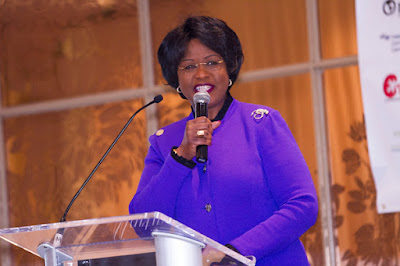 The ambassador then told us a parable of two men, one black and one white, selling water on opposite sides of the street.  The water came from the same well, in the same bottles, with the same labels, for the same price.  And yet, she posited, the bulk of Africans would buy their water from the white guy thinking, it must be better.  She summed up, “The only difference between us and them is they believe in themselves, their children, and their grandchildren.”  Indeed.

This statement garnered a nervous chuckle from the crowd, and brought back for me the memory of Mwalimu Hyasinta in one of Kaitlin’s interviews saying that “Wazungu do things better, they have God-given talents that we don’t have.”  I remember that reading this, I was both exasperated and a bit sad that she felt this way, that she truly believed she was somehow naturally inferior.

Now, however, I will return to Moshi armed with the proof of the plethora of Tanzanian ubora at this conference.  It’s not that I didn’t believe it either; it’s that they don’t believe it at home.

So, one of the main questions that threaded the day together was, “How can diasporan Tanzanians help Tanzanians at home?”

Dr. Minja and many others have already arranged and planned future medical missions (remember, the focus of this particular forum was health), aiming to bring over not only supplies but also experts in the field who have the ability to train Tanzanian medical professionals on the latest innovations in healthcare.

Diasporan Tanzanians are well poised to be both linguistic and cultural ambassadors for change.  Who knows Tanzania better than a Tanzanian, after all?  Who knows the daily grind, the thought processes, the expectations and the doubts?  For diasporans to show by example that change/mobility is possible, that a better life is attainable, that taking preemptive measures and thinking about the future in a positive way…. well, that is everything.

To apply one of my favorite Michelle Obama quotes: “When you’ve worked hard, and done well, and walked through that doorway of opportunity, you do not slam it shut behind you.  You reach back and you give other folks the same chances that helped you succeed.”  This is what I see DICOTA doing.

Don’t get me wrong.  I am not pooh-poohing the achievements of the last quarter of my life nor mzungu-initiated change completely.  I’m just admitting that, while well-meaning, it is kinda sorta another form of colonization: we are coming over, we are taking charge, we are enacting the ideas we think are best for the local community.  The conclusion I drew from this forum is that it’s time for Africans to heed the call to action by their fellow Africans, that diasporans are the bridge between Africa as it is and Africa as it could be.

I think I’ll go one step further and put my special “sarah” spin on things, informed partly by my recent experience at the 15th Biennial Conference of the IASE (International Association of Special Education) in Perth, Australia this past June (heads-up, next one will be in Lushoto, TZ in July 2019!) and partly by my own sense of social justice and inability to be a passive bystander.

If we believe that strength comes in numbers, as Amb. Chihombori tells us, then Africa has strength in spades.  Of a continent with 1.2 billion people, Tanzania alone has gone from a population of 45 million to 55 million citizens in the time I’ve been there.

However, in order to modernize and achieve development goals, Africa in general and Tanzania in particular needs the engagement of their wholecitizenry.  No one can afford to be marginalized.  Whether it’s wanawake, watoto, wagonjwa, walemavu, waombaji, wakata, or any other down-and-out group of people in the general population, the divisive parsing of the African population by Africans weakens the continent as a whole and keeps it down.

Former President Jakaya Kikwete promised as his campaign slogan: Maisha bora kwa kila mtanzania or “a better life for every Tanzanian,” but I have given some thought to this statement and feel it really should be flipped on its head: Kila mtanzania kwa maisha bora, “every Tanzanian for a better life.”  Kikwete’s version intimates an outcome, but no idea of how to reach it.

I think I’ll leave the pontification there, and end with some photos and captions from the event.  By the way, all of the photos in this blog entry (save the very last two of me!) are credited to Iska JoJo whose work can be found here: http://www.iskajojostudios.com 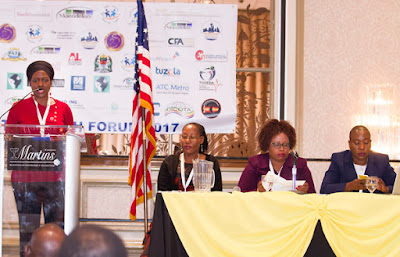 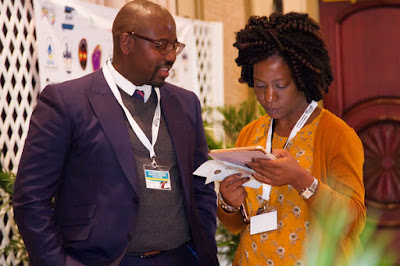 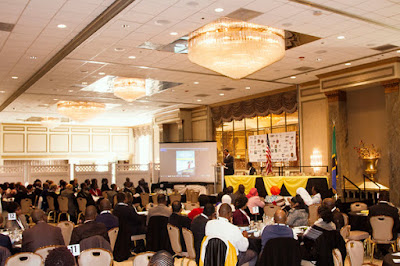 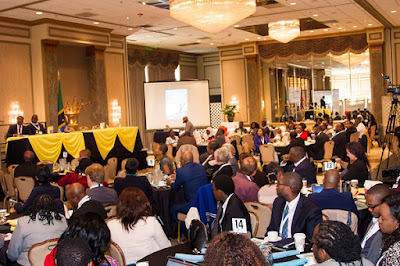 Throngs of attendees to the left and to the right. 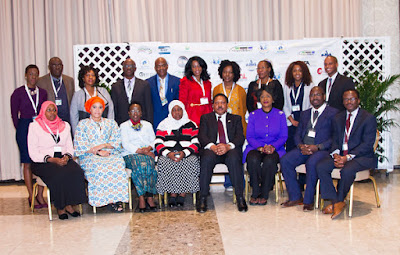 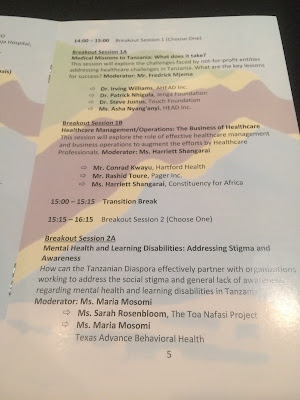 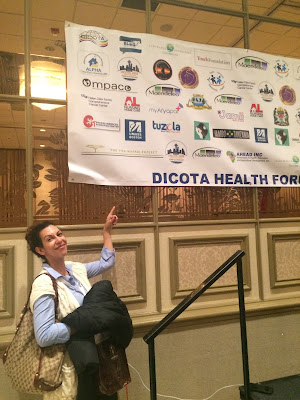 The evidence of my participation!