“Meow” and Forever: A “Tail” of a Girl and Her Cat

PLEASE take the time to check out the feel-good story that I’ve posted below written by Ashley Maisano for the blog on TheAutismSite.com.

And, PLEASE, have a peep at the video found on this link: http://blog.theautismsite.com/rc-autistic-woman-talks-with-cats/?utm_source=ag&utm_medium=paid-affiliate&utm_content=link_eIL9Aj&utm_campaign=

I, for one, am filled with warm fuzzies (furries?) and have already watched it about as many times as I did the Derek Jeter retirement commercial for Gatorade.  (Note to self: watch that again, too).

Jordan and her black cats are absolutely precious, and this just goes to show what a “pawsitively” amazing effect our feline friends can have.  I mean, as a cat mama since childhood, I’ve always known it, but this should silence the “crazy cat lady” haters out there – at least temporarily.

A round of “appaws” to Mychal’s Learning Place and Adopt & Shop for this remarkable partnership and, Jordan, keep “feline” the love, girl!

Sadly, I don’t think Mwalimu Hyasinta is gonna go for this idea for our Toa kids, but perhaps we can replicate something similar with non-living sensory stims in Tanzania.  For instance, the Teddy Bear could probably be safely introduced….

Anyway, consider this “amewsing” photo of one of my own “purr-fect” pusses a bonus to this post.  🙂 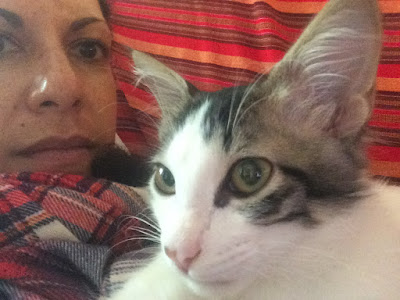 This young woman named Jordan was diagnosed with autism, and has gone through life without barely saying a word.

She started attending Mychal’s Learning Place, which is a non-profit program that provides services for students with developmental disabilities.  They teach them how to cook, clean, do laundry, take the bus, and use the computer.

Although this program was very helpful for Jordan, there was something that was still missing in her life, as she was still extremely quiet.

Mychal’s then partnered with Adopt & Shop in Culver City, CA, and this was the answer they’ve been waiting for.

Jordan has a love for black cats, so she began working with them and it has helped her open up and even talk!  Her eyes light up, she smiles and laughs, and says, “kitty kitty kitty.”