As a coda to my last post regarding President Magufuli’s stance on pregnant schoolgirls, please have a look at this article from the Capital News in Kenya, dated January 5th, and written by Jeremiah Wakaya.  (Photo credit CFM News).

Tanzania opposition lawmaker, Tundu Lissu, has left the Nairobi hospital where he was admitted after being shot in September last year in Dodoma, TZ

Lissu, who represents Singida constituency, told a news conference at the hospital on Friday that those who attacked him used sophisticated military weapons, an indication according to him that President John Magufuli’s government was involved. 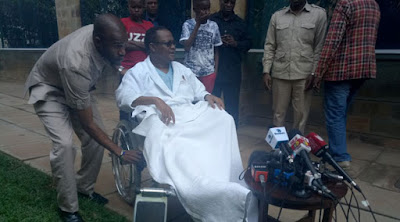 He revealed that eight bullets have so far been removed from his body but one remained lodged since removing it would be life-threatening.

Lissu is set to fly abroad on Saturday for specialized care to help him regain his ability to walk.

The official opposition Chief Whip said the shooting was an assassination attempt by what he described as the cruel regime of Magufuli.

“I was shot 16 times for denouncing President Magufuli who, since coming into office, has turned the country, literally, into a police state,” Lissu stated.

“Newspapers are closed for criticizing the government, radio stations are shut down, journalists are arrested and beaten.  Even posting critical messages on social media has become a criminal offense,” said the Chama cha Demokrasia na Maendeleo (CHADEMA) party MP.

Lissu who is confined to a wheelchair was shot in the stomach and the leg.

According to CHADEMA, Lissu had previously complained of being ‘tailed’ by a car and repeatedly said he feared for his life.

Lissu has had a series of run-ins with Magufuli’s government and has been arrested at least six times last year, accused of insulting the president and disturbing public order, among other charges.

“Since the attempted assassination, President Magufuli has not made a single public statement denouncing an attempt on my life a leading figure of the opposition,” Lissu noted.

The President of Tanzania’s bar association, the Tanganyika Law Society, as well as being CHADEMA’s Attorney General, Lissu has on several occasions asked government officials pressing questions in parliament, something that rattled the state.

His most recent arrest was in August, after revealing that a plane bought for the national carrier had been impounded in Canada over unpaid government debts.

Lissu accused President Magufuli of leading a campaign against the publicization of his attack even as the parliament remained non-committal on the payment of his medical bill which is an entitlement as per the Tanzanian law.

“We’ve been taking care of sick parliamentarians over the years.  Since I was admitted here, not a single penny has been paid on my bill or upkeep,” he said accompanied by his party chairperson, Freeman Mbowe, and his two sons – Agostino and Edward.

CHADEMA has, since Lissu’s shooting, tirelessly demanded a probe to unmask the perpetrators of the crime which the party described as shocking.

“CHADEMA has received with great shock the report on the shooting of the party chief legal counsel who is also opposition Chief Whip in parliament and Singida East MP, Tundu Antipus Lissu,” a statement released by the party following his attack on September 7th read.

Magufuli’s excesses have been a concern since he ascended to power in 2015.

On March 23rd for instance, Magufuli fired his information minister – Mtama MP Nape Nnauye – after he ordered a probe into an incident where Dar es Salaam Regional Commissioner Paul Makonda stormed into the offices of the Clouds FM Media Group with six armed men.

Makonda had demanded the airing of a controversial video aimed at undermining a popular local preacher with whom he had a dispute.

“We are used to seeing such incidents during coups d’etat, when armed men enter studios to proclaim they are overthrowing the state,” Nnauye said condemning the occurrence.

“I will advise my bosses to take punitive measures against the regional commissioner,” he lamented.

While dismissing Nnauye, Magufuli said he will not let anyone teach him how to do his job.

The Amnesty International Report 2016/2017 highlighted cases where over a dozen women were assaulted by the authorities with at least 200 people injured after the government placed a ban on all political meetings in June last year until 2020.

In August last year, over 20 suspected gays and lesbians were arrested with community-based HIV/AIDS prevention programs for gay men being stopped in November according to Amnesty.

Magufuli also announced that all girls who get impregnated while in school will be forced out amid public outcry.

Asked whether he would support such a policy, Lissu said denying girls education on account of being impregnated was an abuse the right to education.