So, I’m just over a month late in writing about the tremendous 5th anniversary celebration of The Toa Nafasi Project, but just like with my real “sweet sixteen,” let’s chalk it up to late blooming and a variety of conflicting interests, all of which seem to be priorities at the moment.

Anyhoo, the reason this blog post is titled “Sweet Sixteen” is because the celebration was held on the 16th of February, this year 2018.  Another reason might be that it is one of the first important indicators of success and maturity that we have crossed, and a cause for a lot of fanfare and festivity.

We started planning back in the Fall of 2017 while I was still in the United States, with a collective effort from Allison who engineered the making of the invitations, and Gasto who secured the venue and catering.  On my end, I created the guest list and brought some zawadi (gifts) from the U.S. for the teachers to try out before using them on our students.  (You’ll see below….)

The day itself got off to a fairly slow if not predictable start with lots of “Will there be/Won’t there be” issues.  The attendance of the Regional Commissioner of Kilimanjaro was not at all a sure thing up to the very minute she arrived!  However, everything worked out in the most amazing way, and by day’s end Carla and I were pinching ourselves at the success of this day and, indeed, of the last five years.

Congratulations to The Toa Nafasi Project and all its staff, students, and supporters on its first five years!  Here’s to five more!!  Check out pictures from our “sweet sixteen” below….

Here is the whole gang assembled toward the end of the day.  I am flanked by Mama Anna, our illustrious RC of Kilimanjaro and Mr. Kiwelu, Toa’s Secretary of the Board and also Councilman of Ng’ambo Ward, one of the three in which we currently work.  To Anna’s right is Mr. Kamenya from the District Commissioner’s office and Baba Ngowi, another member of Toa’s Board of Directors and the very first person I met when I got off the plane in “in Africa” in 2007!  To Kiwelu’s left are Ester Rambau and Joyce Urassa of the District Education Office, and Toa Head Teacher and Project Leader, Hyasinta Macha, about whom I write on this blog often.  The back row includes teachers from our four participating government school sites: Msaranga, Msandaka, Mnazi, and Kiboriloni Primary Schools. 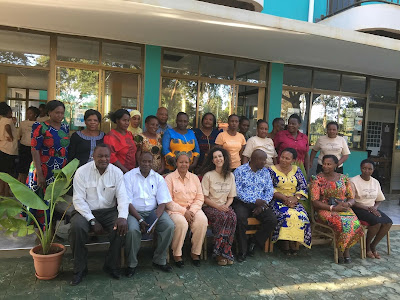 Here is Mama Anna speaking about Toa’s accomplishments.  I love how her hand gesture caught in this photo looks almost messianic, raised in a sort of blessing. 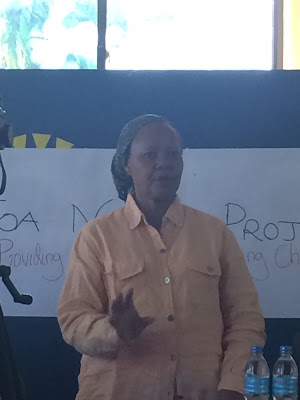 This is a short video that ITV took of Mr. Kamenya speaking on behalf of the DC’s office about the necessity of organizations like Toa which, though technically private sector, support the initiatives of the public sector by complementing them where necessary.  Specifically, he discusses the importance of children who are “slow learners” being given an equal opportunity to learn in the typical Tanzanian classroom.  Toa helps make this possible.

The return of Mwalimu Mshiu!  You may remember this formidable woman from Toa years past.  We worked with her while she was the Standard One teacher at Msaranga Primary School for several years and then after her retirement, with Toa directly in 2015 and 2016.  We have since gone our separate ways, but dear Mama Mshiu came back to scare us all into submission and say some very powerful words about how Toa tutors are provided training that even the Tanzanian teacher training college-certified teachers are not given. 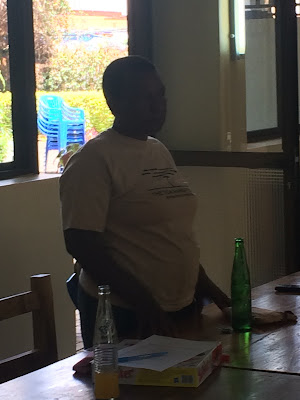 The Toa staff sang the most beautiful shairi or poem about Toa and what the organization means to them.  I became quite verklempt and was unable to do much more than cover my face with my mismatched arms.  In case you were wondering the cause, the right one hangs out the driver’s side window regularly! 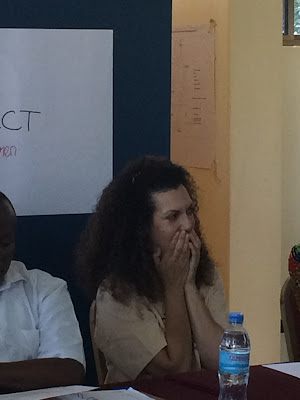 Okay, I might get in trouble for posting this since no one featured in this picture had any interest in having their photo taken, but….  Behold Carla, my friend Rhiannon, and her volunteer and friend (and now my friend too) Trish getting their chow on. 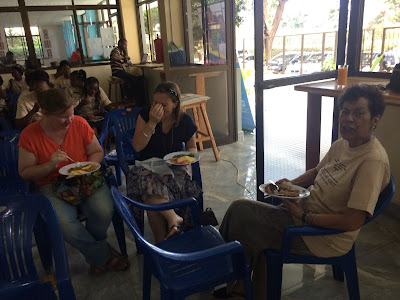 Carla complained that she “could always be counted on to play the fool,” but come on, no one forced her to get up and do the electric slide with a bunch of women a third her age.  I mean, do ya see me in line here???? 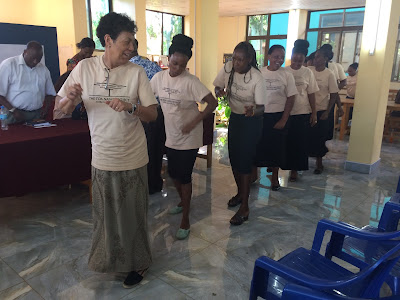 Prior to the actual program, Gasto did a motivational talk with the teachers and I broke out the fun and games.  As part of Toa’s holistic approach to Early Childhood Education, we like to make Fridays into “fundays,” with educational recreation.  I had brought back Twister and Connect Four and the teachers tested them out before introducing them to our students.  They were quite the hit! 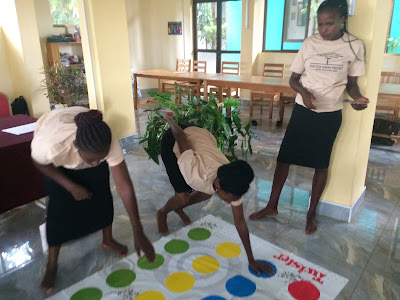 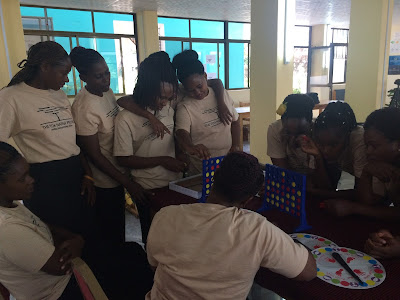 The whole shebang was written up, again courtesy of ITV, in Nipashe, a national Tanzanian newspaper.  The headline reads, “Secret Successes in Education Have Been Revealed.” 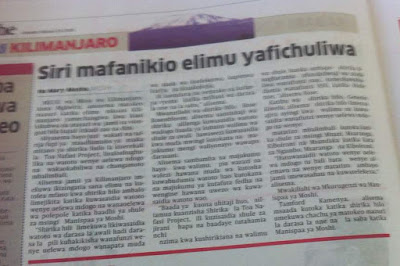 Think I’ve pretty much covered the high points, but if you’re itching for more, I have the whole extravaganza on video.  Let me know if you’re interested in a private viewing!  😉 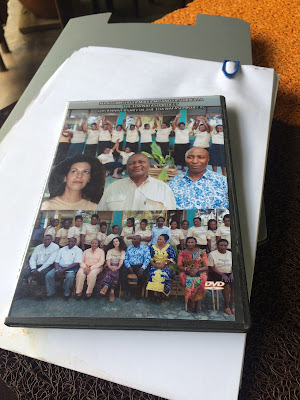